On 1 November Pauline Hazelwood gave a watercolour demonstration, the subject being a steam train.

She started with a 2B lead pencil and good watercolour paper. From a photograph she drew the steam engine, carefully measuring the front round shape of the engine and its funnel and their relationship to other parts of the train, creating a perspective where the engine ‘face’ was the largest single shape, left of centre. Then she started adding the watercolour. She began at the top of the front, using fairly strong pigment in a dark grey colour. She said she preferred Winsor and Newton paints and used ultramarine blue, cerulean blue, lemon yellow, viridian green, hookers green, permanent rose, magenta, cadmium red, Paine’s gray, etc. She used sword brushes, relatively small, and kept each brush to one colour. She lay a fairly wet colour down, and then worked it down over the area she wanted, allowing the paint to be thicker and thinner as she liked, lifting out unwanted colour. Later, when the paint had dried, she went over it again to deepen the colour and bring out the shapes. The front part of the engine was very detailed but the further away parts were much less defined. Simple techniques produced a very pleasing overall picture. 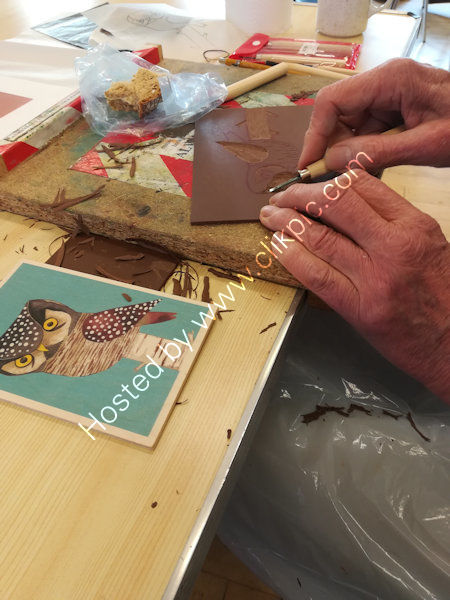 cutting the lino
Kevin ran a fun and enjoyable class. We did not need any elaborate equipment, just a flat surface for inking and a roller for the application of the ink and knives. Concentrating on the reduction method, the initial design was gradually printed, slowly changing the surface throughout the process by reducing the printable area. We used oil based ink for the day. We were taught how to prepare the block, transfer the image, cut the surface away, mix ink, ink the block and register the prints. We used a nipping press but also covered hand printing without one. We took an image 7” x 5” which had to be broken down to four colours.