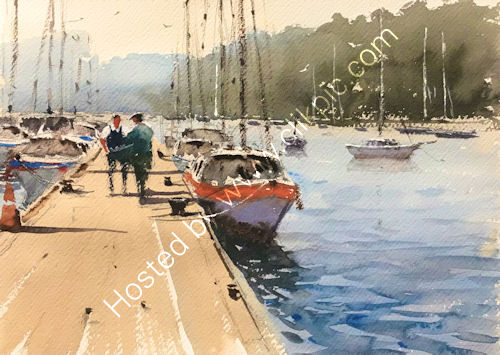 This month's meeting was given over Zoom by Ian McManus, a watercolourist, who took a photo from the iternet for our demonstration. He considered thata ther are 3 stages to a painting – the initial drawing, the general washes and then the final definitions.

He had drawn the marine scene of boats at anchor on a river with some people standing on the jetty, so his first wash covered the sky and the water then the jetty. The paint direction followed the surface to be painted. Stronger colour were used as he came forward in the scene and even thicker in the defining stage for the main boats and the people.

Ian used tonal effects for definition of the nearer trees, the boats and the masts in the mid-ground then stressed that these must not detract from the main subjects of the painting.

The final definitions using warmer tones and thicker paint were added to the boat and the people, thus emphasising the main subject of the painting.