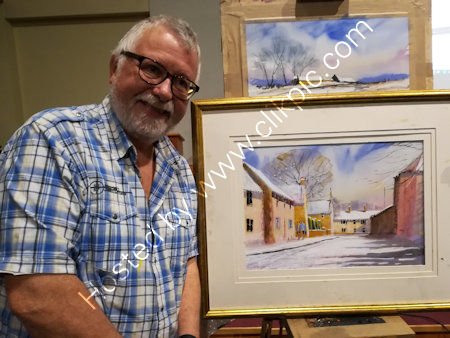 Our last monthly meeting saw us watching a demonstration by Tim Fisher using oil pastels to create a winter scene.

He began with an outline drawing in pen and ink over which he painted the sky and ground in water colour oils giving a soft effect. This was then built up with the pastels to produce a delightful picture of a village street in the snow. Tim showed explained to us his techniques of rolling the pastels to achieve different effects with the bare trees, the use of a scalpel to scratch lines and a variety of highlighting ploys.

When he had finished his main picture he used up the last 10 minutes of his talk to produce another winter scene which was most impressive and beautiful.